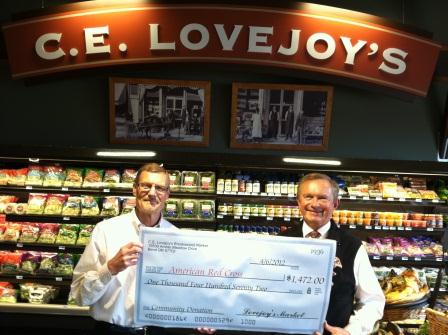 Bend, OR (April 23, 2012) – C.E. Lovejoy’s Brookswood Market and its shoppers partnered together during the month of March 2012 to raise over $1,400 for the Oregon Mountain River Chapter of the American Red Cross. In support of National Red Cross Month, patrons of the locally owned grocery store were asked at the check-out counters to consider donating  $1.00 to the American Red Cross. The cards that were signed by the donors declaring their contribution covered several walls of the market by month-end. Lovejoy’s matched each gift and announced the total on Thursday, April 19th, when representatives presented the check to the local American Red Cross chapter’s Executive Director, Tom Farley.

“We are delighted with this inaugural drive for the life saving and rebuilding mission of the American Red Cross. It’s partnerships like these between non-profit organizations and local businesses that make the success of preparedness possible.” said Farley. “This was the first in a series of similar programs we’ll be rolling out to increase awareness of emergency preparedness. Knowledge and education help to build a stronger foundation within our communities so that when a disaster strikes, lives can be saved.”

As part of the program, each Saturday in March American Red Cross volunteers staffed a preparedness table with information and materials for customers. C.E. Lovejoy’s created an “Emergency Preparedness” display with a tri-fold flier directing customers to emergency kit items in specific aisles within the store.

Lovejoy’s Manager, Diana Franko, said that the brochures will remain available at the Customer Service Desk. “We’re very proud to work with the American Red Cross in an ongoing relationship that assists local residents. It fits our mission as an independently owned community market to support organizations in Central Oregon, and we had an overwhelmingly positive response from our shoppers,” she said. “It allowed people to give a little, and leave feeling like they were making a larger difference.”

C.E. Lovejoy’s Brookswood Market is Bend’s newest full-service, locally-owned and operated grocery store. The store offers high-quality fresh produce, a complete meat department, freshly-baked goods, local dairy products and specialty cheeses, a full-service gourmet deli, and a wide selection of beers and wines. The market is located at 19530 Amber Meadow Drive, Suite 140, in Bend off Brookswood Boulevard near Elk Meadow Elementary School in the Brookswood Meadow Plaza. For more information, call 541-388-1188. Visit us on the Web at www.celovejoys.com, and follow us on Facebook (www.facebook.com/celovejoys) and Twitter (@celovejoys).