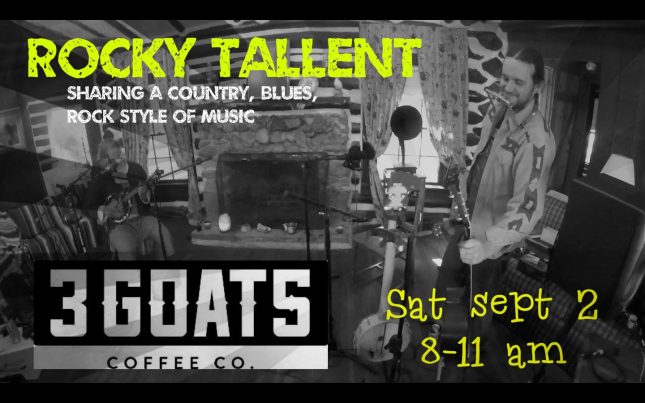 Live From Jack’s Cabin, the first solo release from Rocky Tallent (The Tallent Brothers), is a path that ventures through the undiscovered backwoods of rural Missouri, guiding the listener through impassioned affairs and spiritual perplexities, all while keeping cadence to the meter of the Ozark Mountains. The unmistakable sense of trial in Rocky’s gravelly voice, and his honest testament from hardships to hand-me-downs invoke the passion and sentiment ever present with the veteran artists who have helped to shape his musical signature.

Arguably the most influential period in Rocky’s musical journey began in the spring of 2007 after relocating to Woodstock, NY with his brother Brandon. The Brothers became friends with music legend, long time drummer of The Band, Levon Helm. It was there where Rocky initially became involved in studio work and later earned credits on Helm’s 2009 Grammy winning release Electric Dirt. Being surrounded by an alternating cast of acclaimed musicians at the Midnight Rambles and in the studio, and constantly being informally mentored by Levon Helm, Woodstock proved prominent in nurturing the development of Rocky as an Americana songwriter and performing artist.

Rocky and Brandon, as The Tallent Brothers, released a self titled ep, and self produced their full length debut record Back On The Old Stuff. The record received international airplay and was hailed as one of the “best records of 2015” by The Troubadour Show (http://www.troubadourshow.com/). “There’s a Spirit”, an inspirational tune co-written by Rocky and Nashville songster Pat McLaughlin (My Little Pumpkin,Songs About Rain), provides an undisguised look into the metaphysical themes that routinely appear in Rocky’s lyrics. After touring in support of Back On The Old Stuff and landing back in southeast Missouri, Rocky completed an extensive 2016 tour launching his career as a solo artist.

Live From Jack’s Cabin was recorded over a three day stay at the Wilderness Lodge in Lesterville, MO in March of 2017. Rocky’s appreciation of traditional music and the influence of his Ozark mountain upbringing are easily recognized both thematically and musically in the five song ep. “Mother Nature’s Music” a song co-written by Rocky and Brandon Tallent, spins a youthful tale of a dancing bear, a croaking frog, and an inquisitive child, while teaching us to notice and appreciate the natural world around us and the music that it creates. “Wing And A Prayer”, a folky narrative recounting a visit from old friends and the tomfoolery that ensued, was crafted with comparable witty humor and imagery as made popular by folk music songwriting greats like Tom T. Hall, and John Prine. The ep comes to a close with a sincere ballad “When Good Dogs Get Old”, a powerful exploration in to coming to terms with the human condition. The collection of songs was recorded live with minimal overdubs, allowing it to retain much of the aural integrity that Jack’s antique cabin contributed, and sequentially offering a genuine representation of the live show Rocky Tallent will deliver to venues nationwide on his Summer 2017 tour.